I have just been dropped off to My humble apartment after the match and press conferences. It was certainly an interesting day for sure.

The match did not go as planned. I’m not sure what happened in the first set. My mind was somewhere else. Actually it was in Belgiums. After yesterday when Goffin declared I was and am his heroes with posters of Me in his bedrooms I kept wondering which posters they were. I hope it wasn’t the one I am thinking of.

Now I have done the obligatory press conferences allow me to spend a moment or two (no more than this) to make elaborations directly to you, My fans. It is true, I have lost some sets so far this tournaments. Firstly I want to make 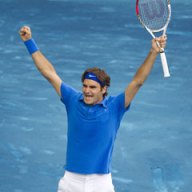 emphasis that I have been placed in a very difficult quarter of the draw. No other top players are facing the kinds of players I am. They are playing people you have heard of. But Me? I have no idea who these people are. How can I prepare for a match in these difficult circumcisions?

Secondly, and as I mentioned to the media just earlier, the courts are very slow this year. It always seems to be My side of the court too. Clay courts are not supposed to play slower. I will bring this up at the next player council meeting. We cannot be expected to play on different surfaces if they play different to each other. It makes no sentences whatsoever. As My driver was driving Me and some staff home one of them thought he was being a smart Alex by reminding Me that a couple of weeks ago I said, “If you want to be a good claycourt player, you must be able to play everywhere.” … I was prompt to fire him for quoting me out of context like this.

I have some time off tomorrow. Paul Anaconda wants me to hit his balls early in the morning on a practise courts but at least I will make some relaxings in the afternoons.

5 thoughts on “Clay is slower than Hard Court – who knew?”